My Road to Driving Independence 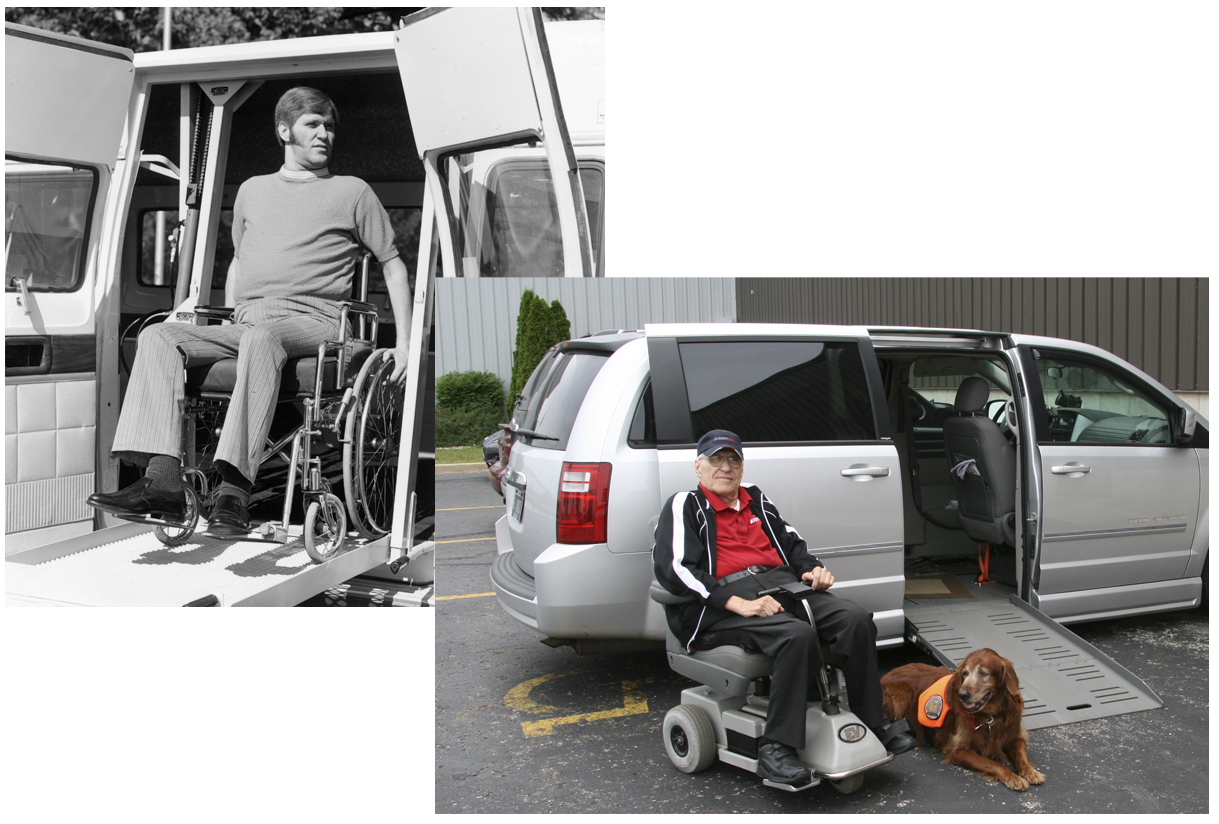 I broke my neck exactly one month after my 16th     birthday. I was swimming in Murder Creek near Kirkland, Alabama, with my brother and friends and decided to do a jackknife off a make-shift diving board we'd rigged up. I can remember springing from the board, and bending down to touch my toes and then suddenly seeing a bright white light as I hit the water. The next thing I knew, I was floating face down in the creek unable to raise my head above the water.

I could hear the other kids laughing and playing as I struggled to get my head above the water. I kept holding my breath thinking someone would soon come to my aid. Eventually I lost consciousness. When my brother finally realized something was wrong, he lifted my head and pulled me to shore. As he jerked and tugged to drag me up on the beach, he basically administered a crude CPR which restarted my breathing. My mother had watched it all happen and knew there was something terribly wrong. I had to be drug up a steep embankment and driven several miles over bumpy Alabama back roads before I made it to a hospital.

The next day I was told I'd broken my neck at the C5 vertebrae and had no use of my legs and limited strength in my arms.

My mother didn't tell me for months afterward, that the official copy of my Alabama driver's license had come in the mail the day of my accident. Every 16-year-old anxiously awaits the freedom and independence that day brings. In my case, those two things were taken away from me that day - at least that's what it seemed at the time.

I spent the next 16 weeks and three days in the hospital, and while the doctors and nurses did a great job of dealing with my injury, I still had a long way to go with the rehabilitation process. At that time the cost of one day at a rehabilitation center was roughly $30 a day, and our household's weekly income was under $200. Rehab services were not covered by our medical insurance, and paying out-of-pocket was not an option.

With my mother's determination as an example, I was able to find my new level of ability.

This was the first of many times I would witness my mother's determination to give me every possible opportunity for independence. My mother is, in some ways, one of the most timid people I know, but she can also be the most stubborn. The Alabama Vocational Rehabilitation Services offered financial assistance for rehabilitation expenditures; however, I did not meet the criteria for their program. My rehab was an issue of such paramount importance that she would allow nothing to stand in her way. Because of her persistence, VRS finally agreed to help with the rehabilitation expenses.

My experience at the Mobile Rehabilitation Center provided me many invaluable lessons, probably the most important of which was not to focus on what ability I had lost but to make the best use of my remaining ability and to reevaluate my plans for the future. With my mother's determination as an example, I was able to find my new level of ability.

Learning to drive was one of those challenges. In 1962 a quadriplegic (anyone with an injury to the cervical spine) was not considered a candidate for driving. At the rehab center, I watched paraplegic patients - many of whom had similar capabilities as me - as they were trained to drive using special hand controls. My dexterity and strength were limited, but I had no doubt that I could drive just as well.

I was able to convince my mother that if she would get the family car equipped with hand controls - specifically one with right-handed controls since I'd be using my stronger left arm to steer - I could drive.

Of course, she knew that allowing me behind the wheel wasn't exactly accepted protocol for a quadriplegic, but she also knew the independence of driving on my own could redefine my attitude and self-esteem. She would not allow unreasonable limitations to be put on me. Even though society said that quads shouldn't drive, we proved them wrong.

My mother ordered the controls and had them installed by a local mechanic everyone knew as Hot Shot, who had never seen hand controls, let alone been trained on how to install them. On Good Friday, 1962, my mother pulled up to the rehab center with our 1961 four-door Rambler equipped with right-hand controls. I hit the road with my mother driving the entire 2.5-hour trip back to our home.I spent most of that weekend behind the wheel including the return trip to the rehab center on Easter Sunday. The entire rehab staff was unaware of this all.

I continued to drive with my original Alabama license (which made no mention of my disability) until about six years later when I was pulled over in Northern Indiana for burning my tires at a stop sign. Of course, at that point, the officer realized that the 15-year-old described on my license didn't exactly fit the description of the person he'd observed operating (somewhat recklessly) with an out-of-state license plate over the past six months (I'd actually been in Indiana for two years at that point).

In the eight years since my injury, attitudes had begun to change. A quadriplegic, providing they could demonstrate that they could operate a motor vehicle safely, had, generally, the same driving privileges as the rest of society. So I applied for and received my first truly valid driver's license.

This story has several morals, but I share it for two main reasons. First of all, my road to driving independence was rough, to say the least, but the freedom of mobility has given me many opportunities, including 36 years as an employee of BraunAbility. Besides Ralph Braun himself, there's probably no one here who appreciates better than me the freedom a wheelchair van or any other type of mobility vehicle offers.

Secondly, I owe all that I've accomplished in life to my mother, who simply believed in doing what needs to be done, no matter what limitations others put on you (or what you put on yourself). My own desire for independence would not have been enough as a 16-year-old boy. I strongly believe I needed my mother to give me the ability to bring to life the dreams I thought had been destroyed by my injury.

As I've mentioned before in my blogs, attitude and perception determine whether a life is just survived or whether it's truly lived. I may be partially paralyzed from the chest down, but there's a worse disability, one I sometimes refer to as being paralyzed from the neck up. Thanks to my mother's influence, that will never happen to me. I'll take my condition over the latter any day.