Mother With a Disability Finds Hope in Two Disabled Sons

We can feel isolated and powerless when living with a rare disease, but what if your story begins to bridge the barrier or open a way for someone to connect? What if sharing your story offers a glimmer of hope to someone standing at the edge of desolation? ...What if your story starts an important conversation?" -Neena Nizar

It began with meeting Adam. Adam lived in the United States, and Neena lived in Dubai. There was a spatial difference between them, but more than that, there was a physical difference. Neena had a rare disease, one that caused difficulties walking and required frequent doctor visits. When Adam saw Neena for the first time, he asked her to marry him and to "give love a chance." Neena didn't want her disability to inconvenience the man she loved. But she clung to his words and took the leap with him.

Then their love grew by two. Arshaan, a beautiful and healthy baby boy, came into the world, the spitting image of his mother. As Neena was carrying their second son, she noticed that Arshaan's ankles and wrists seemed to be widening abnormally and his chest narrowing. A doctor would later tell her she was imagining it. Then, just four months into her second pregnancy, she learned that her unborn son's limbs were about six weeks off developmentally. It was suggested that she end her pregnancy. 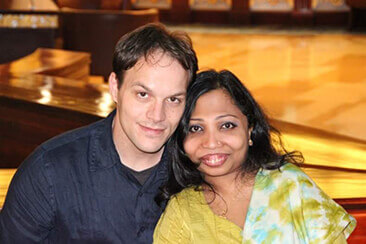 The disease that was causing developmental delays in her baby was the same disease that was causing changes in his older brother-similar irregularities Neena herself possessed. A doctor recognized it from a slide her professor had shown in class. In fact, the professor skipped it quickly, saying, 'this is so rare, you will never come across a case in your lifetime.' And yet, here they all were, exact matches to the rare disease. Finally, they had a diagnosis: Jansen's Metaphyseal Chondrodysplasia. It was genetic, and Neena had unknowingly passed it on to her two sons.

"Personally, it was an absolute shock. I had never wanted to marry for fear of the anxiety of not being able to have a child," Neena said. "When doctors had said I never would carry a child to term, my world shattered. Just as we were considering adopting, Arshaan came along, bright-eyed and full of health. He was the biggest baby born in the ward on July 3, 2008. To watch all that unravel two years later was like watching ominous gray skies chase away the sun."

Neena lived for 32 years with a misdiagnosis, something she called a "mysterious unnamed villain inside my body." Rare diseases are, by definition, infrequent, so the chances of finding someone with the same diagnosis is slim. Of the 7,000 rare diseases in the world, only 30 known cases of Jansen's exists. Neena and her sons are three of them. Still, Neena says, "This rare journey doesn't have to be a lonely one."

A Letter for Her Son

Neena wrote a letter to her youngest son after his birth:

"For months leading up to the birth, Adam and I had decided on calling you Armaan. But as they handed you to me on that fateful afternoon five years ago, I had no memory of our plan.

I can't remember much of what happened in the hospital room that afternoon. But I do remember insisting that your name be Jahan. The sudden and insistent name change caused a little flutter. Post-partum depression, perhaps? But nobody was ready to argue with a grieving mom, and as the family hastened quietly to make that correction on your birth certificate, I too made a pact to silence my troubled heart.

'Jahan,' we later learned, was a Persian name meaning, 'protector' or 'savior of the world.' When I think back now, I smile and remain comforted by the knowledge that God had been by our side all along and had a better plan for you than we did.

For you didn't come with just a diagnosis or a statistic, a mere condition to be boggled over. Instead, you came with a steely resolve and a silly smile to warm my aching heart. You came to complete our family and to be a wonderful friend to your brother. For God knew we needed you.

He knew we needed you to come along to make things right."