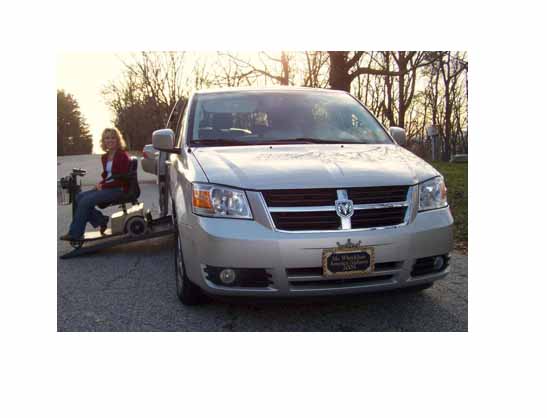 Trisston Wright Burrows lives in Alabama with her husband, Brian, and regularly speaks and writes about living with a disability. Over the past few years, she's contributed several blogs to BraunAbility.

Earlier this year, I purchased a new BraunAbility Entervan, my fifth one, to be exact. Talk about brand loyalty! For me, it's the total package - accessibility, dependability, and independence. And to top it all off, it just looks COOL! It's been nearly 18 years since my parents purchased my first wheelchair accessible vehicle. I was 16 at the time, and we'd been looking for a wheelchair van suitable for a teenage girl who happened to have a disability (Cerebral Palsy). We wanted an accessible vehicle that was not too big, and because of some bad experiences in the past, I knew I didn't want a full-sized van with a lift.

Wheelchair Van that is Finally Smaller

After doing some research, we ended up at Sylacauga Handicapped in Alabama. As we looked around the dealership, it seemed like there were a lot of accessible vans, but they were all big, bulky vans with lifts. It was a hot summer day, so the dealer, a man named French Floyd, invited me and my parents into his air-conditioned office. On the way in, we noticed the dealer's personal van. He happened to have a disability, and he was driving a Plymouth Voyager. It was white with gray ground-effects - I'd never seen anything like it before! The dealer showed us how the van operated by remote control and how the kneeling system lowered and raised the van. As we sat in the dealer's office, I kept looking out his window in the van. In my mind, it was perfect! I couldn't keep myself from asking about it. He explained this was a new van on the market, and he was certainly enjoying driving a smaller van. My parents could see the excitement on my face, and they asked if he'd consider selling it. As you can imagine, he was a little shocked, but he looked at me, smiled, and said he'd think about it.

Wheelchair Van: Always on the Mind

I thought about the van all the way home. A day or so later, he called back and said he'd sell the van to us. Talk about an answer to a prayer! We went back the next day and purchased it. Driving my new van home that day, I knew I'd not only found my very own first vehicle, but I'd found my new independence - a BraunAbility wheelchair van! Since then, my van has opened up a whole new world to me. I've been able to attend and graduate from college all while fully participating in classes, clubs, and sorority. From traveling across the state making appearances as Ms. Wheelchair America/Alabama 2005 to meeting and marrying the man of my dreams, my BraunAbility van has been right there with me through it all.