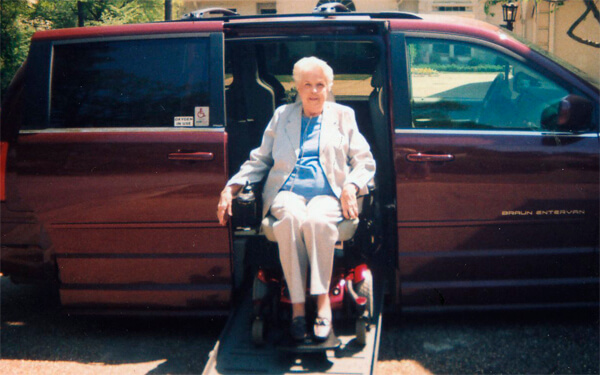 Doris Hutchins is many things, among them a very satisfied BraunAbility customer from Birmingham, Alabama.

Doris described herself as "quite limited" in her ability to enjoy life outside her home ten years ago. She requires the use of a wheelchair as well as an oxygen tank, so leaving the house required a lot of packing, unpacking, and planning.

Then a friend recommended she get in touch with her brother, the owner of Sylacauga Handicap, Inc. in Alabama who also happened to have muscular dystrophy. She visited the dealer and was especially impressed with the BraunAbility Side-Entry wheelchair van. A decade later she described her life as, "Free! Free! Free!" Doris was a three-time wheelchair accessible van owner, the last one a BraunAbility Chrysler Town and Country with a DVD system and leather seats, a vehicle she described as, quite simply, "The Ultimate!"

Doris especially appreciates the new independence her BraunAbility wheelchair van has brought to her life. She volunteers at her church three mornings a week and goes on regular shopping and dining trips. Her BraunAbility handicap vans have even taken her across the country on vacations, like a three-week trek from her home state of Alabama to California. "I even went on a trip to both rims of the Grand Canyon and on a trip across Canada," she said.

To keep up with her love of travel, Doris needs a wheelchair vehicle that is comfortable and dependable -- and she's found both in her BraunAbility wheelchair accessible vehicle. "We've had no problems with our vans, and they've certainly been very reliable and improved my independence," said Doris. "I pass along a big THANK YOU for the service you provide!"

Dorris sadly passed away in 2012. She was a loyal BraunAbility owner and a friend to many.