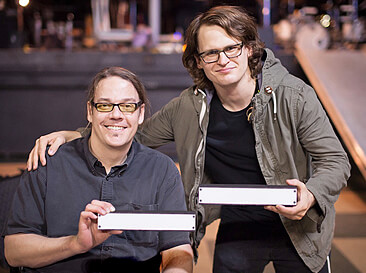 Jason isn't a BraunAbility product owner, but he became a friend to the company in the late 2000s and his story was one we knew we wanted to share to a broader audience. Hopefully, the advances he's made in the music industry inspire a new generation of artists to do the same.

Jason Gerling rolled through the front door of his parents' house once again, this time a man on a mission. He lowered himself to the floor from his chair and, step by step, scooted his way down the basement stairs to the space that started his life in motion. There was no sign of life when he reached the bottom, until he saw the familiar glint of a cymbal peeking out of a closet.

His dad's instinct had been correct: Jason couldn't stay away from the thing he loved.

His counselor, ever the springboard, could see the difference in Jason when he came to talk about his progress. What had once been the embers of his artistic expression were starting to glow again. Without hesitation, she suggested a comeback concert.

Jason began contemplating the idea. There were some inherent problems with a disabled man playing drums: namely, he couldn't operate the bass drum and hi-hat cymbal with his feet. Then he remembered that most live bands play with prerecorded tracks. I can do that! he thought. That's how I can play just like everyone else.

It took a lot of preparation, laying down the tracks digitally and lining them up for the series of concerts. But the night of his comeback, he was atThe Quest (previously known as Prince's nightclub Glam Slam), feeling almost like Prince himself, with the warm welcome of over 400 people in the audience. Jason told his story to his biggest audience to date, then rolled into position behind the set. Time and the chair seemed to completely slip away.

"Next to marrying Bobbi, it was one of the best nights of my whole life, returning to the drums again," Jason later said.

"One day, I got a call from a guy at this church I was attending and he said, 'Hey, Jason? We want to get you back playing drums here.' And I told him that I was prerecording the bass drum at the time. He said they were doing a lot of live stuff and didn't know how that would work out.

"That was when the idea was planted in my mind. How could I do this where I don't have to prerecord the bass drum?" Jason knew that he needed to find a sensor that would allow him to play the drum by hand.

He installed an amplifier into the bass drum to imitate the sound of an unmodified kit as closely as possible. The church was impressed. "It was like nothing was different," Jason said.

March 27, 2014, was the 20th anniversary of Jason's car accident. The kit was raced into production to try to get it finished in time for the celebration. The kit was called Jason's "20th Anniversary Dream-Come-True," and, though it may seem odd to include a celebration of the day you became partially paralyzed in the same sentence as the phrase "dream-come-true," to Jason, it's just life. And now life came with a state-of-the-art taxi-yellow drum kit. Risen Drums and Paiste Cymbals gave him endorsements for doing what he loved, and the media was there to document the story.

Now a husband, keynote speaker, musician, and inventor, Jason balances his many different hats and never looks behind him unless it's to learn. Sights set ahead, he started a website: wheelchairdrummer.com.

There, he's posted instructional videos demonstrating his inventions, how he plays from a chair, how to order a bass drum and everything in between.

"I just want to show, yes, it can be done and no, you don't have to give up. I'm proof of that. I'm honored and humbled to be in the position of doing that. And yes," he acknowledges, "that did not come at a cheap price. I went through major hardship -- depression, despair; I'm still dealing with physical ailments."

But is his dream of touring really over?

"There are still people out there who tour the world in a wheelchair as musicians," Jason said. "I don't see drummers doing it...but I'm not going to rule that out. If that happens -- if some big-name act wants me to tour -- I would say yes. That isn't my first priority, though."

"The bottom line is an encouragement through the power of music," he said. "But I'm not going to say no if John Mayer calls me and says, 'Hey Jason, we need a drummer...'"