Home On the Range and In a Tri-Wheeler 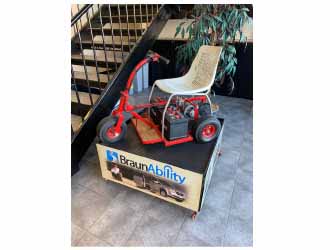 Positioned at the bottom of the main stairwell at BraunAbility's primary manufacturing center in Winamac, Indiana, is one of the earliest prototypes of Ralph Braun's Tri-Wheeler, the first three-wheeled motorized wheelchair introduced to the mobility industry. It's definitely a "rough cut" compared to the polished models you see in other photographs and brochures that line the hallway. In fact, the prototype isn't much more than a lawn chair bolted onto the base of a riding lawnmower.

Despite its humble appearance, the design would be refined to eventually create the flagship manufacturing facility for what is now BraunAbility. That Tri-Wheeler symbolizes a level of independence that Ralph and his customers had never experienced before. It's also a humbling reminder of how far accessible vehicles and other mobility products have come in the past 40 years.

It's been years since we made a Tri-Wheeler, but we still have a legion of loyal fans still driving the scooter. In fact, we heard from Guy Tucker, owner of Advanced Mobility Systems in Texas, who shared the story of a longtime customer and friend, George Ancell, and how he first found his way in the seat of a Tri-Wheeler.

My name is George Ancell, and I have a small cattle ranch in Texas. Back in the early 70s, I was good friends with a man named G.W. Whisnand, who also used a wheelchair. Like me, he was always looking for new "stuff" to make life easier.

One day he called me and said he had something new and I needed to come by and check it out. The next time I was in town, I stopped by. He had a brand new Braun Tri-Wheeler. He said it would get him around better than anything else he'd ever tried. He rode it into town almost every day (a good half-mile from his house).

Now G.W. was a large man, and that chair took him up steep ramps that no other chair could - and believe me, he had tried them all. Knowing how hard he was working that chair, I was very impressed with it.

I told him the Tri-Wheeler was really keen, but I just didn't have the money for one. A few days later I was in the barn lot sorting some cattle. There was an old black cow who didn't care that I was trying to get her to move by screaming and popping a whip. Instead, she decided she would just knock me over and get me out of her way.

Of course, everyone around the barn thought it was really funny to see that old cow roll the boss over on the ground (I failed to see the humor in it myself). Needless to say, I was quite perturbed.

I went into the house and called Ralph Braun and asked if he could build me a chair that would do everything but climb a tree. He said, "I believe I can build one that will even start up a tree..."

I told him to put one together and send it to Texas ASAP. I had the boys load that old cow and her calf (I didn't want any of her kin on my place either), and they hauled her to the sale barn to pay for my new motorized wheelchair.

That was a long time ago. Since then, I've sorted lots of cattle and I've always managed to get out of the way of those snorty ones. I still have an old Tri-Wheeler around, and I look back on it with fond memories. Thank you, Ralph Braun, for giving us so many great products over the years!