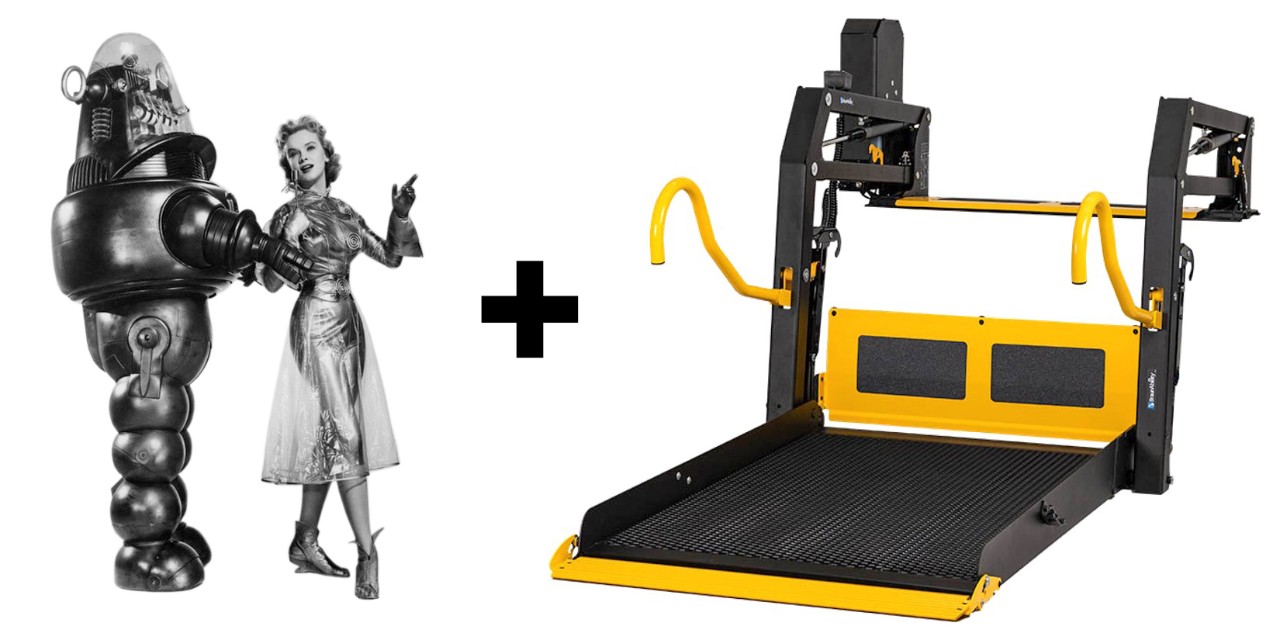 Phill Bell is currently Senior Director of Global Corporate Strategy at BraunAbility. He has been an automotive enthusiast from his youth and currently spends too much time thinking about his 65 VW rebuild project at home. (It’s going to be a sweet ride.) He is also a mechanical engineer, business strategist, Air Force veteran, and middle-aged man of mystery.

Question 1:  What do robots and wheelchair lifts have in common?

Question 2: For you automotive buffs out there – which decade is the “golden era” for auto design?

Starting with that second question, one compelling answer might be the 1960s, when muscle cars were in their heyday (Chevy small blocks are still the basis for LS motors), Ford and Ferrari were locked in a racing battle for the ages (Matt Damon pulls off a convincing Carroll Shelby in the 2019 Ford v Ferrari), and auto manufacturers were quite literally producing works of art. For example, the Museum of Modern Art in NYC is considered one of the most important museums of art and culture in the world. Several years ago, a 63 Jag E-type was on display just down the hall from from Picasso’s guitar sculpture and Van Gogh’s Starry Night painting – art indeed!

One could also argue that the golden age of the automobile is … the 2020s.  Right now!  In 2020, car buyers will be able to visit a Chevy showroom and see (a) the historic Corvette C8, capable of hustling to 60 mph in less than 3 seconds, alongside (b) an all-electric Bolt, capable of 259 miles range.  Cars these days are faster, cleaner, more efficient, and more user-friendly than ever before.

Getting back to that first question, one burgeoning trend in the auto industry is autonomy – and it has a surprising connection to wheelchair lift design.  You’ve probably heard of autonomy:  that’s the macrotrend where vehicles can safely drive themselves across town to any address you choose.  And, just so you don’t miss the main point, they do so without driver interaction.  This idea has been in practice in some form for many years, starting with the DARPA Grand Challenges in 2004-2005.  Early autonomous vehicles in these competitions were comically bad, swerving around harmless desert shadows while crashing through innocent bushes (that, an environmentalist might point out, did not deserve to be rudely mishandled by confused infant robot cars).  Today, Waymo self-driving vehicles have logged millions of miles on public roads and continue to accumulate real-world mileage at a rate of 25,000 miles per day (not to mention the billions of miles driven in a simulator, but more on that in a moment).1

How did self-driving cars go from cartoonish toddling to striking competency in 15 years?  The answer in part is due to significant advances in artificial intelligence and robotics, which themselves have been accelerated over the last decade by competitions like the DARPA Grand Challenge. Talent at Purdue University have now discovered a way to use this growing field of artificial intelligence (think: robot brain) to improve wheelchair lift design – in a unique and surprising way.

Chih-Wei Li led this research as part of his PhD thesis in Mechanical Engineering (these days he goes by Doctor Li).  With his advisor, Dr. Justin Seipel, Chih-Wei reasoned that if you could use artificial intelligence to perform human tasks – like safely navigating a vehicle across town without bothering bystanding bushes – perhaps you could run that science the other way, and get a computer to operate as a human would, with its inherent limitations and susceptibility to performance degradation under stress. Then you could run simulations (like Waymo), where the very-human robot brain could interact with different wheelchair lift designs to see if one might be more favorable than the other. Chih-Wei’s thesis goes into an appropriate level of detail about research methodology, which is to say it’s not exactly light reading for the average bear, but the general concept I like most is an analogy to the “sports choke.”

Yes, that sports choke.  Think of Greg Norman in the 1996 US Master’s Tournament, who entered the final round with a 6-stroke lead … and lost by 5!  (Add it up.  That’s an 11-stroke slide over 18 holes.)  Or for a more recent example, look at Jimmy Garoppolo in the 4th quarter of Super Bowl LIV, who committed a series of miscues that kept the ball in Patrick Mahomes’ hands (condolences, 49ers fans).

Question 3:  So how can a world-class golfer suddenly lose his swing, or an elite quarterback lob a desperation ball to the defenders – just when the pressure is on and they most need their skills?  And what exactly does this have to do with question 1 and wheelchair lifts?

Scientific American wrote a good article on the topic of choking that I think answers question 3 very well.  Sian Beilock, a University of Chicago neuroscientist, found that elite athletes do best when they are relaxed and not over-focusing on the task at hand.  Do something correctly ten thousand times, and your muscles will “remember” how to do that something without interference from your brain. Technically speaking, the cerebellum becomes a sort of autopilot for the complex task that has been mastered.  However, when outside stresses intrude, the autopilot switches off.  “They start thinking too much about aspects of what they’re doing that should just run outside of conscious awareness,” Beilock says, “and it actually disrupts them.” She found that the cerebral cortex, which is responsible for higher-order complex thought, hijacks the cerebellum.  Or, put another way, when our stress levels are low familiar tasks come free and easy, but as stress levels rise our ability to do that familiar task can degrade, which causes more focus on the task at hand, which degrades performance further, and so on in an ever-worsening cycle – until the last hole is played or the last minute ticks off the clock.2

Which brings us back to question 1.  Chih-Wei found that a very similar dynamic exists with the wheelchair user interacting with a wheelchair lift.  Put simply, the more confidence a wheelchair user has in the lift, the safer they behave. The more stress they feel, the more they bump into boundaries or high-center on the side rail.  Chih-Wei spent a summer traveling the US with two other graduate students to study how wheelchair users and their attendants interact with wheelchair lifts, and to learn what sort of stresses are involved with the human/machine interaction.  He focused on a handful of things, including weather conditions, lighting conditions, platform sway under load, platform angle, and platform geometry. Then he went back to the lab to quantify just how good – or how bad – the average person is at maneuvering a wheelchair along an intended route under a variety of conditions.  Purdue granted him permission to conduct human-centered experiments, and he dove into the problem.

From this research, Chih-Wei was able to use artificial intelligence – like that used for autonomous vehicles – to build a simulated robot brain that not only maneuvers a wheelchair like a human, but also reacts to outside stimuli like a human.  This robot can choke under pressure.  The results are very interesting and exciting.  In the virtual world you see through the eyes of the robot.  At night, you see shadows cast from the lift’s vertical channel lights just like in the real world.  Shadows on your virtual legs look just like shadows on your physical legs in the lab under the same conditions.  When the robot is instructed to board a platform, sometimes it bumps into the side rail a few times while getting centered, just like in the field. This robot is convincingly good at being average.  The robot can interact with machines hundreds of thousands of times to really tease out advantages of one design over another.  Here is where our three questions converge:  where Waymo used simulation to constantly improve their autonomous vehicles, Chih-Wei used simulation to find ways to improve the design of wheelchair lifts. The result?  A lot of it is surprisingly intuitive.

Much of this insight has already been applied to BraunAbility lifts.  The premium BraunAbility Q-Series lifts for international markets feature sideplate lights for clear boundaries + zero shadows, a 300% more rigid platform, and an intuitive hand pendant, all combined with an overall beautiful design aesthetic that is more welcoming to the wheelchair user.4  5         In North America, BraunAbility leveraged the Q-Series design to improve rigidity across our entire portfolio at zero cost to our commercial customers.  We use LED lights on towers.  We have introduced lift variants with wider platform widths.  And the innovation pipeline continues to be filled with new products that have been influenced by Chih-Wei’s research.

Call it robot meets wheelchair lift.  That’s how BraunAbility recently leveraged autonomy and robotics to improve our wheelchair lifts in practical ways.  Who knew that the science behind self-driving cars would be relevant to wheelchair lifts?  We do now.  I’m a gearhead, and while I count it as fun to watch Hagerty rebuild an old stove bolt straight 6, I count it as exhilarating to come to work and tap into today’s automotive macrotrends to improve the lives of wheelchair users and those who care for them.  We at BraunAbility will continue to find ways to redirect emerging science from the automotive industry to “make life a moving experience for all,” as our Mission Statement says.  Stay tuned for more great innovations in the coming months and years.

Vehicle suspension systems are the biggest contributor to platform sag while lifting, which is why BraunAbility does not endorse installing 1,000-lb rated lifts in the side door of full-size vans.  The amount of side suspension compression under a maximum load leads to a platform angle sag that we can’t support.

For the curious, you can see evidence of these design insights in the Q-Series videos here.  We spent a lot of time designing a machine that users would like to be around.  In particular, I like how the engineers (Rob Bettcher and Justin Kline) talk about the importance of feeling safe and secure in the “rigid” portion of the website.