Rise Above: The World As A Classroom 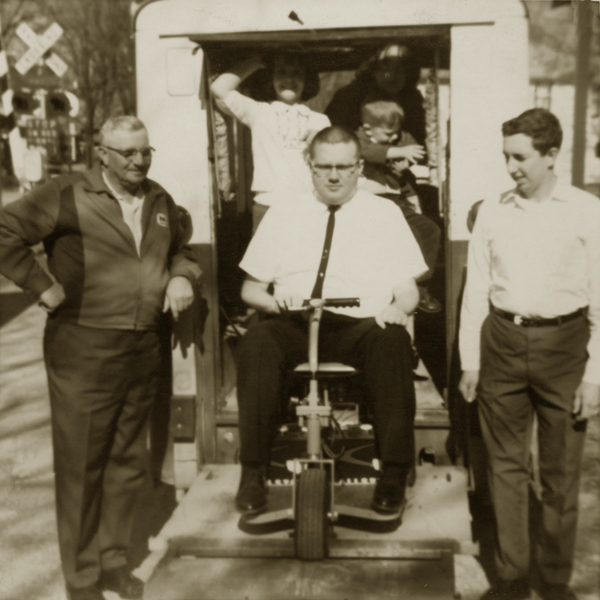 In Chapter Four of his book, "Rise Above", Ralph Braun discusses how his early education contributed to his success in business. As he entered high school, he was faced with a two-story school building that was inaccessible by wheelchair. Ralph managed to complete all of the courses that were taught on the first floor and was then forced to take two years off. He eventually returned to earn his diploma, relying on friends to lift him and his chair up the flight of stairs several times each day.

Often, the most memorable lessons occurred in the "real world," as he tinkered with cast-off mechanical parts and devoured Popular Mechanics magazines as fast as they could be printed. And of course, he continued to learn important lessons from his parents.

As you'll read in the excerpt below, his love of all things mechanical was clearly inherited from his mother's side of the family:

~ From Rise Above, Chapter Four: The World As Classroom ~

There is another way to illustrate the differences between my mom and dad. It involves one story about a motorized wagon and another about a horse.

In the first story, my uncles had taken an old, one-cylinder, gasoline-powered washing machine motor and attached it to a wood wagon with the idea that we could all ride it around the yard and have some fun. They mostly did it for my benefit, and let me tell you, it was a big deal to me. You had to kick start it, like a motorcycle, and then someone would give it a good push to get it going. You sat inside it, like a Radio Flyer wagon, and steered it as it took off. Since there was no brake, the only way to stop was for someone to run alongside the wagon and grab you so you could slow down.

In the second story, when we were still living at the nursery and farm, my dad rented a pony for me to ride one summer. Every so often my dad would take me down to the barn we kept the pony in, saddle up the pony, and put me on it. I'd ride around the little barnyard. Then on the first day of school, my mom gave me a bath and a haircut and dressed me in nice, new clothes so I would look presentable. But I'd been riding the pony all summer and wanted one more ride before my father returned it from wherever he rented it. So I begged my dad, like kids do, for one last ride, and he gave in. He put me on the pony like he always did, and then all of a sudden it took off running. Something must have spooked it, or maybe it knew its days on the farm were numbered because it ran full speed through the cornfield.

Since it was the beginning of the school year, the corn was almost fully grown. I held on for dear life and had absolutely no control over the pony. Finally, it dumped me off, except my leg got caught in the stirrup. So instead of the pony just running away, it dragged me for about 50 feet through the wet corn and dirt. When my dad finally caught up, the pony had stopped and I was a mess. Back in the house, my mother had to go through the whole bath and clothes routine all over again. I missed the bus, and they had to drive me to school. In 1947, this was not that easy because the roads were bad, the school was five miles away, and we had a 10-year old jalopy.

In those two stories lie the seeds of my future. One side of the family gave me a motor; the other, a pony - and when you put them together you get horsepower. Though I never rode a pony again, thanks to my dad, I've got one heck of a story.