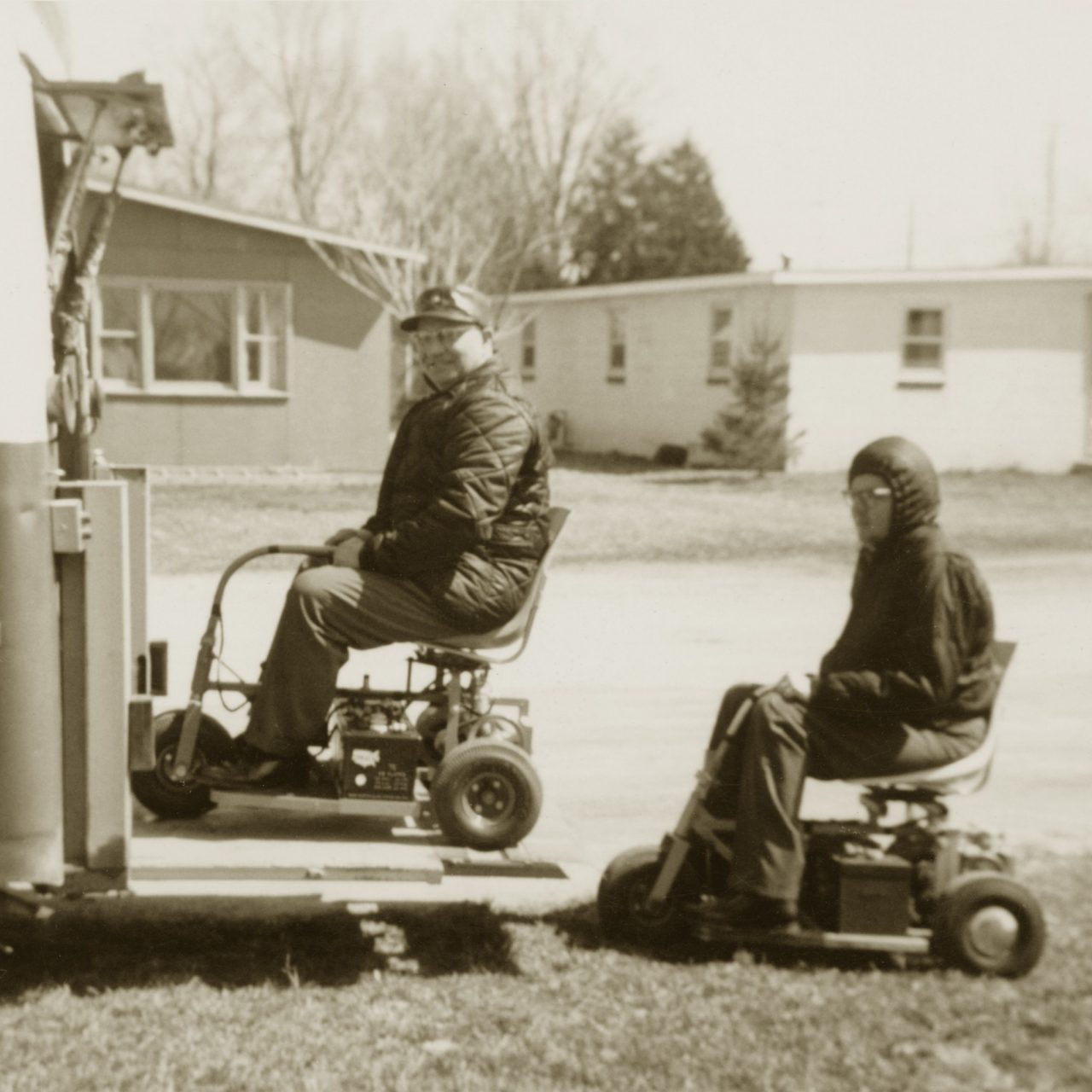 In Chapter Nine of Ralph Braun's upcoming book "Rise Above," the world's first wheelchair-accessible vehicle is born. Fittingly enough, it came in the form of an old Post Office Jeep that had helped fulfill the unofficial motto: "Neither snow nor rain nor heat nor gloom of night stays these couriers from the swift completion of their appointed rounds."

With a little Braun ingenuity and a modified power tailgate lift, the Jeep would now do the same for Ralph - only it wouldn't deliver letters or packages, it would deliver him to work. It did the job for almost three years, but as you'll read, it sure didn't protect him much from the snow, rain, heat or gloom of night!

~ From Rise Above, Chapter Nine: Neither Rain nor Snow ~

I find it interesting that my parents' garage, which used to be a chicken hatchery that was filled with incubators where thousands of lives began, gave birth to my wheelchair business. Although I didn't know it at the time, with my "new old" Jeep and this power tailgate, another new business was about to be born.

We built the first lift-enabled wheelchair van fairly quickly. As we did in the past, we started cutting steel and putting it together. We made our own brackets and mounts and turned the tailgate into a platform-it had to be enlarged so my wheelchair wouldn't roll off it-and fastened it to the back of the Jeep.

I drove my wheelchair on to the lift, rode it up to the Jeep's floor, and went in. The sliding overhead door was impossible for me to close, but at least I was inside. I had taken out the driver's seat and installed a hand-controlled power brake unit that I'd bought at an old junkyard.

That was it. I finished what I set out to do.

Today, people sometimes ask me whether I remember the first time I drove my Jeep after I'd installed the lift. They ask whether I took some kind of celebratory victory lap or drove it around town to show off my creation. They wonder whether I realized then the significance of what I'd done and how it would change the future.

Here's the unvarnished truth: there was no hoopla, no champagne, no eureka moment. I was simply tired. When we finished, I backed the Jeep out of my parents' garage, drove back to my house, and went to bed. The next day, I drove the Jeep to work-another obstacle overcome.

Its back door could not close because of the lift I'd installed, so the fact that my post office vehicle was said to be "weather-proofed" did not apply. Nor did it offer the highly touted "maximum driver comfort" and an "efficient heating and ventilating system." Actually, I guess you could say it did have an efficient ventilating system because the door stayed open and allowed plenty of air to rush in, whatever the weather was. It had "plenty of glass," and if I overlooked the fact that the windshield wipers never worked, it did have "great visibility." With more miles on it than a rented mule, it most definitely did not "save me money-in maintenance, gas, oil, anti-freeze, and spark plugs."

My Jeep served its purpose by keeping me out of the elements and making me self-sufficient. It also gave me a sense of satisfaction that I'd used my wits and creativity to solve a very big problem for myself. Finally, after driving it for a few months, I allowed myself to think, "Hey, this is a pretty slick idea." I called a man in Bloomington, Illinois, named Ray Cheever, who ran a little magazine called Accent on Living, in which I would later advertise. I told him what I'd done and sent him a picture of my lift-enabled postal vehicle, and he ran a story about it in his magazine.

It wasn't much, and I didn't get a huge response from that article, but as I drove my Jeep over the next two and a half years, I did begin to attract some attention. That is, until the good old Jeep finally gave out on me in 1970.
Once again, a door had opened and was about to let the future in.

Clearly, Ralph Braun is not a man that will be kept from making his "appointed rounds." To this day, he continually looks for ways around his disability, always building on and improving his past solutions. The old Jeep may have been a crude fix, but it marked the birth of the automobility industry and opened the door to bigger and better things to come.