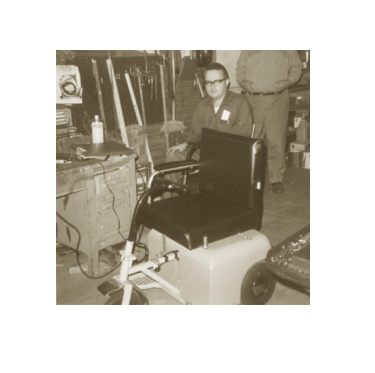 It's Chapter Six of Rise Above, and things are really starting to get interesting! Ralph Braun gives you a front row seat to the creative process as he describes how he built the early prototypes of the world's first electric wheelchair.

Proving the axiom "necessity is the mother of invention," Ralph began to look for a better way to get around after his "iron monster" manual wheelchair left him exhausted at day's end. And like many inventors before him, his first attempt was far from perfect - but it did get him thinking of the future possibilities:

~ From Rise Above, Chapter Six: Adventures in Machine Making ~

To say my first motorized wheelchair was a "scooter" is like calling Frankenstein a Munchkin.

Created in my parent's garage out of a mish-mash of nuts, bolts, wires, tires and other unrelated machine parts, the vehicle was a four-wheeled monster. It was big and loud and dirty and smelly and it tore up everything in its path, including my mother's kitchen, where I first drove it to show her my creation.

To build this beast, I started with a Crosley CC, which was a small, four-cylinder car made in the 40s and 50s. I cut its front end down to 24 inches wide, added a lawnmower differential, four big wheelbarrow tires, two 6-volt automotive batteries, makeshift wiring and switches I got from the hardware store, a kitchen chair, and a motor from a 1957 Pontiac kid's car that I rescued from a mortician's trash bin. Then, like a mad scientist, I welded, screwed, bolted and hammered it all together.

When you consider that the machine had two six-volt batteries and did not have variable speeds, which meant it went either 7.5 miles per hour, or 15 miles per hour, could not go in reverse, and also had no brakes, it was like a hopped-up Frankenstein on steroids. If you were at full throttle, and going down a hill or a ramp, or you were in a tight area, like my mother's kitchen, it was bad news for whatever was in its way. Many times, while trying to maneuver, I burned rubber on my mother's floor, rammed into her refrigerator, cabinets, and sink, and busted through the door.

It was a crude device, but creating it gave me hope that I could build something out of nothing and make it work. Despite the wreckage I caused to her kitchen, my mother was also happy, as was my father. They saw that I was making progress, and that it was only a matter of time before I'd get what I wanted.