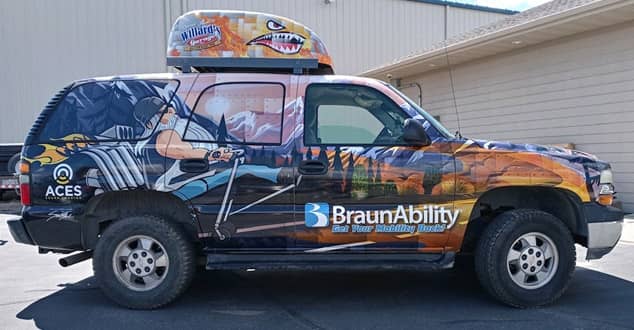 Having just retired, Mike Tiffany was ready to live a life without much worry or care. He had the two things he needed for a great retirement: time and his Tahoe truck, never anticipating he’d be a self-described “invalid” in a matter of months.

The Montana native noticed a red rash on his leg one morning, and it began to burn relentlessly. After weeks of medic observation, cellulitis was diagnosed, but not before the infection had eaten away at his left leg’s tissue and bone, leaving Mike at risk for life-threatening complications.

Mike told his doctor to amputate or hand him a hacksaw so he could do it himself.

He lost his left leg that day, but his life was saved. Months later, he returned home as an amputee. His 18-lb tuxedo cat Annie scolded him with meows for nearly an hour, making her disapproval of his absence – and relief that he was safely home – very clear.

But Mike’s medical issues weren’t finished. Despite an impressive titanium prosthetic that allowed him to walk comfortably, his right knee began to buckle under the pressure of doing double-duty for his body, and a nagging pressure sore sent him back to the hospital, resulting in another surgery, another rehabilitation process, and the eventual loss of his prosthetic.  Between his rehabilitation and Covid, Mike was left stuck in his home for 18 months, now using a manual
wheelchair to get around. “My Tahoe was just feet away from me, and I sat here locked up in my house,” said Mike.

And then, an internet search led him to a spark of hope – the BraunAbility Turny Evo seat.

He learned the Turny Evo seat could be installed in the driver position of his Tahoe. With the push of a button, it would swivel out of the truck and lower down to a meet Mike at the height of his wheelchair, allowing him to transfer into the seat. With another button push, the process was reversed, and Mike could get behind the wheel again. The BraunAbility Chair Topper could be installed on top of his truck and would lift and lower his manual wheelchair and stow it in the overhead case.

He instantly knew his life could change with the Turny Evo and Chair Topper combination. He found a dealer in a nearby town who could install the system in his truck. The day he saw the completed product is one he’ll never forget. “I probably spent 20 minutes sitting in my truck with my hands on the steering wheel, just appreciating what was about to happen. I was getting my life back,” said Mike.

With his independence back, Mike feels like he has a new lease on life and appreciates every trip, no matter how small. “I can go anywhere now. I’ll drive somewhere to get hot chocolate instead of making it at home. Why? Because I can,” said Mike. “When I found BraunAbility, everything changed.”

And no matter where he travels in the big state of Montana, people stop and ask him what he’s driving and how it works. “Everywhere I go, it’s the same reaction. People are just amazed,” said Mike. “Last time I was out there was a little boy watching me get out of the truck and into my wheelchair with his mouth open, just staring at me like I was a cool Transformer.”

Mike decided his Turny Evo changed his life so much, he wants to make sure the world knows all about it. He had a custom, colorful wrap that's bound to get the attention of anyone within eyesight. He demonstrates his mobility system whenever he gets the opportunity, directing curious friends and strangers to BraunAbility to learn more about the Turny Evo. He wants to help anyone he can learn how to regain their personal freedom, something he never thought he’d lose.

“I never dreamed I’d be in a wheelchair and having to ask people for rides just to get to my doctor appointments,” recalled Mike. “Those days are over now, all thanks to BraunAbility.”