The Thrill of the Hunting from Your Wheelchair 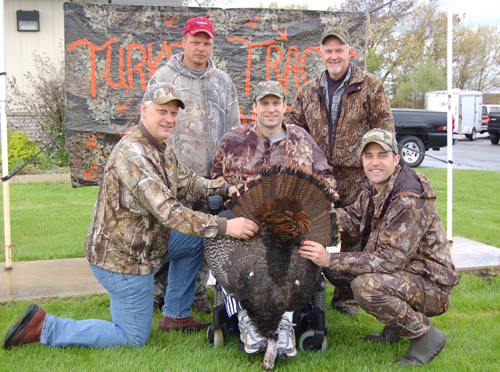 Hunting From A Wheelchair

Doug and Carol Corey knew something was wrong when they watched their 15-year-old son, Eric, run during high school baseball games. He just didn't have the strength or speed of the other players.

"I had this sinking feeling then, but I just didn't believe it could be true," said Carol. The little things she'd noticed - minor falls here and there, dropping things - were all too familiar. Her father-in-law (Eric's grandfather) had been diagnosed with ALS (Lou Gehrig's Disease) just a few years earlier, and they were watching the disease take away his mobility and independence little by little.

Several doctors and neurologists thought the same thing. The terminal disease, which typically affects adults in their 40s or 50s, progressively weakens the body's muscles. A typical prognosis is two to five years after diagnosis.

It took over a year for her suspicions to be confirmed, but Eric was finally diagnosed with ALS at the unprecedented age of 16.

Once the shock of the diagnosis settled in, Eric and his family settled in and prepared for the road ahead. Eric had been an avid hunter his entire life, so his parents sought sponsorships from organizations like Hunt of a Lifetime to take extraordinary trips to exotic places, from the backwoods of Alaska, where he shot his first black bear, toZembaba, Africa, where he brought home an impala eland, cape buffalo, and zebra. These experiences have been highlights of Eric's young life, and his trophies from these hunts now cover the walls of Corey's ranch home in Northern Indiana.

As time progressed, so did Eric's condition. He began using an electric wheelchair, and his dad made a rack on the back of his truck to carry the chair. Still, he found a way to hunt, finding just as much joy in hunting deer or turkeys in the woods of Indiana as he did hunting caribou in the Quebec wilderness.

And then in early 2009, Eric had an idea. "One day he just turned to me and said, "I think we should have a few kids come up here and help them hunt,'" said Carol. He'd been thinking about it, she said and thought he could arrange for young adults with similar mobility challenges to come up and hunt for turkeys that spring with a little help from local hunters and some adaptive equipment.

With the help of his parents, Eric began contacting local hunters who had property they'd be willing to offer for young adults with mobility challenges to hunt on. They asked a representative from Be Adaptive Equipment, which supplies adaptive hunting equipment, to come up for the day and outfit attendees with the equipment they'd need to have a successful hunt. For some, that's just a device to steady the gun; others require a straw to blow into, which actually fires the gun. They also managed to collect sponsorships so the families didn't have to pay for anything...not licensing, lodging or meals.

"We know how difficult it can be to keep up with medical costs," said Carol. "We wanted this to be a free experience. No bills, no worries, just a fun time that these kids and adults deserve."

They named the event "Turkey Tracks" and set it for the first weekend of turkey season in late April. "That first weekend, we didn't sleep at all," remembers Carol. "We were all so excited."

The event was a complete success. Ten hunters came, many traveling from across state lines in their personal wheelchair vans, and each was supplied with the necessary equipment and a guide to take them to the designated property and facilitate the hunt. And taking it all in with the same excitement as the first time hunter was Eric.

As awareness about the event continues to grow, so has the list of hopeful participants. In 2010 the number of attendees grew from 10 to 17. This year they are expecting close to 30. At times they don't know how they'll handle the increase in hunters, but they're not too worried. "Prayers and more prayers. We've asked God to provide, and he always has," said Carol. She admits that planning and anticipating the event each year, just having a focus away from the realities of Eric's progressive condition, has made each winter easier for Eric and his family, both mentally and emotionally. "We look forward to it just as much as they do."

To make sure they don't turn a single hunter away, they need help. Individuals can sponsor or "adopt" a hunter for $150, which covers accommodations and hunting licenses. The Coreys have also established the Eric Corey Turkey Tracks Fund through a local foundation. Donations to the fund will help ensure the event continues in the future, and if all goes well, grows to include additional hunts throughout the year. They'd like to grow the fund to the point that they can purchase their own adaptive equipment for the hunts.

This year's hunt is set for April 29-May 1st. BraunAbility has signed up as a sponsor of the event already (it happens to be held very close to our corporate headquarters), and we hope some of you will too. Anyone who is interested in joining the hunt or donating to it, as a volunteer or with a donation, can contact Doug, Carol or Eric Corey at cscorey@centurylink.net or become a fan on the Turkey Tracks Hunt Facebook page.

That takes us back to the young man who started it all. Eric is now 24 years old, and could easily have asked for and received donations from the same individuals and organizations who have supported Turkey Tracks and gone on his own hunting adventures before ALS leaves him unable to do so. Instead, he's made that possible for other young adults facing the same mobility challenges. With continued support, he'll build a legacy that impacts and inspires young hunters, their families, and their communities for years to come.