Adam Lane embarks this week on a 60-day cycle from San Diego to New York. It is a journey that has been many years in the making. He was kind enough to take time out to share his story during his preparation for the big ride.

A former paramedic, Adam was paralyzed from the bellybutton down after a motorcycle accident in 2007. He turned to exercise to help him through the challenges of recovery and fell in love with cycling. He raced competitively for 5 years and qualified four times for national, and twice for world triathlon championships. In 2010, the idea first came to him that riding across the country would be an incredible way to experience the sights.

It would be another 10 years before he would start training to put the dream into action. Ten years is a lot of time to piece a dream together, and Adam’s mind revolved around making an impact that might help others and carry a greater significance.

After all, he originally became a paramedic because he wanted to help people. That vision never changed; he’s just in a place to do it differently now. Adam works at United Access, as a mobility specialist, where he matches people with products that allow them to do the things they want to do every day. But he is quick to humbly clarify that he is providing goods and services. “I make recommendations that can open someone’s eyes to the possibilities.” Calling it anything more than that “takes the power away from the person doing the real work.” 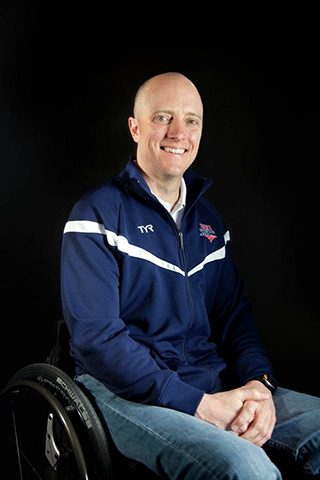 Adam feels his job, his love for cycling, and his experiences as a man with paraplegia place him in a position to make the ride across the country a reality. But even during his intense preparation, he shies away from focus on his remarkable personal fitness achievement and places the focus on others.

With his ride, Adam hopes to raise funds and awareness for United Spinal Association and show the potential of people living with spinal injuries. He is excited to meet people of all abilities along his journey, to share their stories, and to tell his own. He wants people to know how profoundly fitness impacted his recovery and his life. He wants others to see that they don’t have to ride across America to experience the benefits of daily exercise for mind and body wellness.

He also wants others with disabilities to see that they can do many – if not all - the things they want to do. Since his injury, he has met and married his wife, found a rewarding job that supports his family, purchased a home, become a yoga instructor, and found his love of cycling. Again, he’s humble in saying that he hasn’t done anything incredible, and just wants others to know they can do it too. He is audibly choked up, as he talks about missing his wife, Regina, and their three teenage daughters while on his cycling journey. “All the best things in my life have happened since my injury.” He shares.

Being an Advocate for the Wheelchair User Community

Despite his humility, Adam has been doing some truly impactful things, long before this ride. He is active in advocacy for those with disabilities. He has been on the board of United Spinal Association since 2008 and has served on the Mayor’s Committee for Disability Concerns. He has also been active in the Diversity, Equity, and Inclusion Committee for United Access. He hopes his ride will further shed light on the necessity for widespread accessibility and help to normalize public perception for those with disabilities.

Adam is thankful to United Spinal Association, United Access, and BraunAbility for their support in all forms. “Not only did they give me the time off work…they saw the importance and provided the time and the support of people reaching out with stops along the way. I’m so thankful.”

He’ll be making the journey with the help of a BraunAbility Turny Evo seat, which will make it easier for him to transfer in and out of his Dodge Caravan minivan, saving shoulder strength he’d rather use cycling.