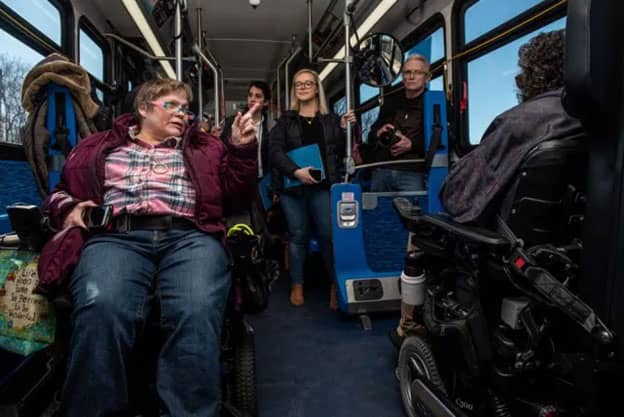 Since it first surfaced as the future of transportation, autonomous vehicle travel has been closely followed by the disability community and with good reason. Whether personal or public, automotive travel remains inaccessible for a significant number of people with disabilities. In fact, 70% of individuals with disabilities in a recent survey by the U.S. Department of Transportation’s National Household Travel Survey admitted their day-to-day travel is limited due to their mobility challenges.

Autonomous vehicles have the potential to become an equalizing force, giving people with mobility challenges the same access to work, to family, to life, no matter their zip code or budget.

While autonomous vehicles may be the key to automotive independence, that doesn’t mean the disability community is 100% ready for it. According to a survey of The Driving Force in February of 2021, 55% of the individuals with disabilities and caregivers said they were still nervous and unsure of whether they’d trust an autonomous vehicle in all circumstances.

While that’s a high percentage, it’s still a good deal lower than the general population. According to AAA, 71% of Americans surveyed were afraid to ride in a self-driving car. Of course, the reward vs. risk ratio is skewed for the disability community, with 76% of those surveyed saying they’d roll into an autonomous vehicle immediately if they knew it was safe.

So, what would have to occur to feel comfortable relying on AV technology? According to The Driving Force:

Even with significant testing, research and validation, there are concerns. Will it sense when something is wrong and pull over or slow down? Will there be the ability for human override?

“I’m not sure any information would make me feel more comfortable,” said one Driving Force respondent. “People can always find ways around safety measures to hack and misuse technology.”

The technology and its safeguards have yet to be perfected, but the journey toward an autonomous vehicle transportation system is well underway. For many people with disabilities, it will represent a major step forward toward personal autonomy and societal equity.

Did you like this article? Keep up to date on the latest from The Driving Force by joining the community.