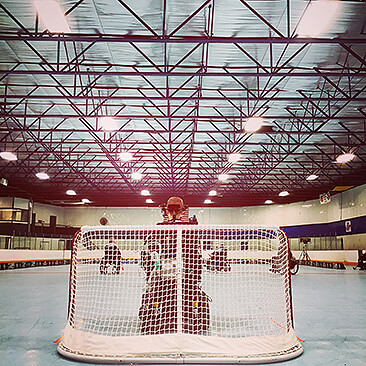 Hockey is a way of life in Michigan, and power hockey is no exception. There's a lake for every kid with a hockey stick. As popular as fish frys are on Fridays, hockey games are on weekends.

"We all love our Tigers or our Lions, but when the Red Wings come around, when it's play-off time, it's the biggest moment of the year for everyone," Dean Olivas Jr., goal tender, said. "We all take our hockey very seriously, everyone pretty much plays from the time they can skate until they are told they aren't allowed to anymore."

"I started playing hockey when I was 10 years old," Dean explained. "I was terrible my first year. I scored a goal on myself. I always wanted to be a goalie and I was just so bad at it. But I didn't give up, fortunately. One thing I've learned from playing this sport is I think I've become a better leader and a better speaker. I used to be this shy little 10-year-old kid who couldn't talk to anyone and now it's a pretty easy thing to do."

Jason Drapinski, forward, is the epicenter of activity as people begin arriving at the rink. A natural leader, everyone is happy to see him. Jason has made many friends while playing in his power hockey team, one so much a brother to him, at his passing, his name was tattooed on Jason's arm.

This sport has shaped who these players are, right down to their personalities.

"How would people describe you?" I asked.

Jason paused, thinking. "Awesome, I guess?" We mirrored smiles as he listed off his accomplishments, including graduating from Michigan State University and becoming a leader on his power hockey team (serving as deputy commissioner for his house league team and general manager for the Michigan Mustangs travel team). "I'm just a fun guy to be around."

I asked the same question of other players. Their confidence was evident. They gave answers of, "energetic and passionate," "charismatic, a good speaker, a leader, a funny guy," and "I'm really just a normal person, a normal kid. I want everything a normal kid wants (like) being on a team."

In fact, a common theme was that of normalcy.

"It's all wheelchair hockey, but really, it's just hockey," said Drew Canada, defense. "I'm in college, I have a job...things are a little bit different in how I accomplish things, but the things I want to accomplish are exactly the same. When you go to the grocery store, people look at you because you're in a wheelchair, but here, it doesn't matter."

"I'm a normal person. Just because I'm in a wheelchair, doesn't mean my life has been any different than yours," Jason said. "I've been through a lot of the things you've been through and we are probably pretty similar if we sat down and got to know each other."

To be a part of the national champion title-holding Mustangs, you must complete a series of games and be chosen from a committee. Power hockey mirrors ice hockey in many ways, though notably minus the ice. Players operate in a smaller area and though House League allows manual wheelchair users to play, only power chairs are allowed in the championships. It was also explained that while House League competitions are more friendly, tournament season brings out the competitive nature in everyone as they all vie for a spot on the Michigan Mustangs travel team and defend the Mustang's national title.

"I come from a sports family," Drew explained. "My dad played sports in high school competitively and my older brother since then. My younger brother actually plays college football and so it's nice because...they can come here and be a fan of this sport, (too)."

"I also like to tease (my brother) a little bit," Drew confessed, smiling. "My little brother is playing college football but he's not necessarily playing at the highest level at the college level. And me being on the Mustangs, you know, we compete nationally. We can say we are national champions...my brother can't say that, and it's nice to be able to."

This hockey team not only gave them an outlet for their energy, but a sense of family to everyone.

"We are a huge family. When it comes down to it, we are not even just teammates. Any player on that team will stand up for their teammate-their brother, their sister-anytime during the game or outside of the game," Jason said.

Clay Martin, right wing, said of the Mustangs experience, "You don't get a much better family atmosphere. I remember after the tournament we hosted here, the US tournament, the league commissioner Chris ... he said to us 'We are part of something bigger than you can even imagine.' And I really believe that's true. This team means everything to me. And it's really something you can't get anywhere else."

And before you congratulate them for being so strong and determined despite their various disabilities, remember they are athletes before they are disabled athletes.

"I think sometimes people with disabilities are admired because the things they go through that are different. And I think it's good to be admired for things that are the same as everyone else," Drew said.

Clay echoed the sentiment, and said, "Even though we're in wheelchairs, we can still play a sport like it's any other sport and take it seriously and want to win; we still want to be a part of something like this, a team."

Power hockey may be right in the name, but by talking with the players its somewhat unclear if power just means the style of chair. Their laughs, their yells to their teammates, their shots on goal, and their personalities pack more power than their chair does.

"One thing I would like people to know about me is that I am not defined by my chair," Dean said. "I think a lot of people look at the wheelchair and think, 'Oh, he's not capable of doing this.' Or, 'He's not able to play a sport," when that's completely wrong. The chair doesn't define me. I can do whatever...as long as my mind and my heart are in it."

Now the teams are preparing week by week to make the final cut for the Mustangs team. They're coming off of a second place national victory last year and this year, Jason thinks, they have a good chance of bringing the trophy home. Until then, the points, the player stats, and the fighting spirit all count.

Clay kept a determined look in his eyes as he said, "A lot of people, when they think of wheelchair sports or special needs sports, they think of something that's all for fun and not very competitive, but that's something that makes this league unique: people take it seriously. Especially with the Mustangs."

It's yet unclear which members will make it to the traveling team and ultimately to the national championships, but their games leave little doubt: as in years past, the Mustangs will be a force to be reckoned with.