The Power Behind the Sport of Power Soccer 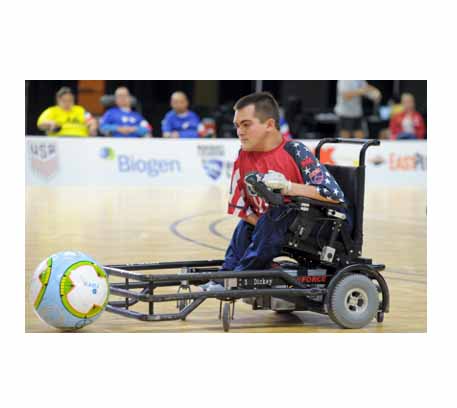 If you have never heard of power soccer, you are not alone! Unknown to many, this intense sport allows power wheelchair users the opportunity to come together as a team, fire up their aggressive spirt and compete. The game is played just like soccer, except, of course, that power chairs equipped with front guards are used to "kick" the ball on an indoor basketball court. Translation: lots of wheels, a bigger ball, and no grass stains!

Take a look at the sport being played, and you'll see just how intense the game can get. Through power soccer, these athletes have learned how to operate as a team, and they understand the importance of each player and the skill set they bring to the court. It's an opportunity that would be hard to come by any other way.

Power soccer has given me the independence I probably never would have found, says Michael Archer, member of Team USA, about power soccer. Michael is regarded as probably THE best power soccer player in the world (and we're proud to say he owns a BraunAbility van and agreed to grace the cover of our Honda Entervan brochure last fall!).

Katie Dickey, another team member of Team USA, agrees. She'd never really participated in any sports before power soccer and hadn't considered herself a competitive person. "But I turned into a different person out on the court, she said. Katie found her competitive side and learned the importance of teamwork to accomplish a single goal: to win. For each of these players, it's their mobility that's allowed them the opportunity to compete.

For JC Russo, a Purdue student studying computer graphics technology, being a part of Team USA has taught him about leadership and teamwork. He says it's his BraunAbility Entervan that's allowed him to get to practices, games and events on a world stage. Without that mobility, he'd be limited to competing against himself in video games - which isn't what he wants.

"I wanted to be a part of a sport, and not an 'everybody wins' sport," said JC. "You have to come out, play hard and if you don't win, you have to practice. You don't get a trophy for losing."

We couldn't agree more. That's why we're sponsoring the BruanAbility Cup in Tampa, Florida next month, which will pit some of the nation's best teams against each other for a chance at a championship title. Many of these teams just competed last weekend during the Superior Cup in Indianapolis, IN, including Michael Archer and JC Russo. Superior Van and Mobility sponsored the tournament and had over 200 athletes come in across the region to compete. The Circle City Riders came away with the title. Will they do it again during the BraunAbility Cup?